Hello Pinksnouters, today we want introduce you a LA based artis HOMO RIOT who proudly define himself a gay street artist. He began his activity after anti-gay marriage Proposition 8 was passed in California in November, 2008. Armed with a stack of posters and a bucket of wheat paste he blanketed Los Angeles with images of bearded men kissing. Today the Prop 8 was declared unconstitutional and the work HOMO RIOT is now an emblem of pride and strength to the gay community, not only in Los Angeles, but across the world​.​ The masked gay bears kiss is became an icon globally.

Hi Homo Riot first of all, after seven years from your street interventions in LA, how many rage of those years drive​s​ your art today?
I wouldn’t say rage drives my art as much now as it did. LGBTQ culture and visibility is at a high point. I see my art as more of a unifier; an identity for some and a point of pride for others.

Could you tell us a bit about yourself, your personality and your artistic background? Who are your biggest influences artistically?
I’m just an artist and like all artists I know, I’m compelled to create and express what’s inside me. It can feel like a curse sometimes. People who don’t have this compulsion find it hard to understand. My husband for instance.
I have a degree in fine art and a studio in Los Angeles. I don’t do as much street art now as I used to, although I’m active in the sticker and slaps scene internationally.
Biggest influences, Raymond Pettibone, Jamie Reid, Rauschenberg and the pioneers of male nude photography, Von Gloeden, George Platt Lynes, James Bidgood and Bruce Of Los Angeles. 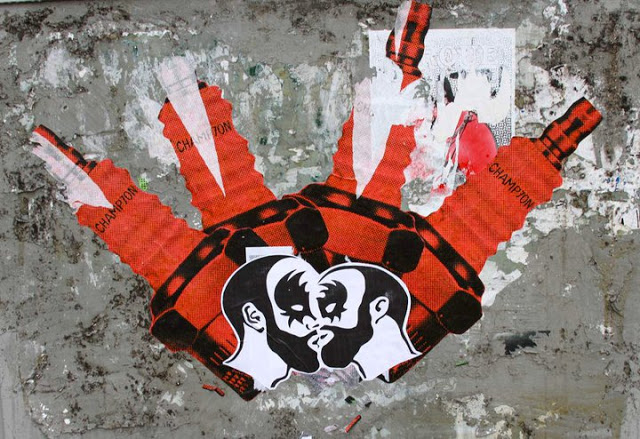 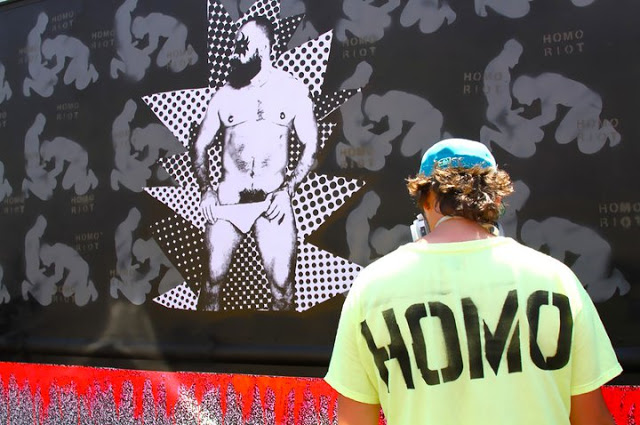 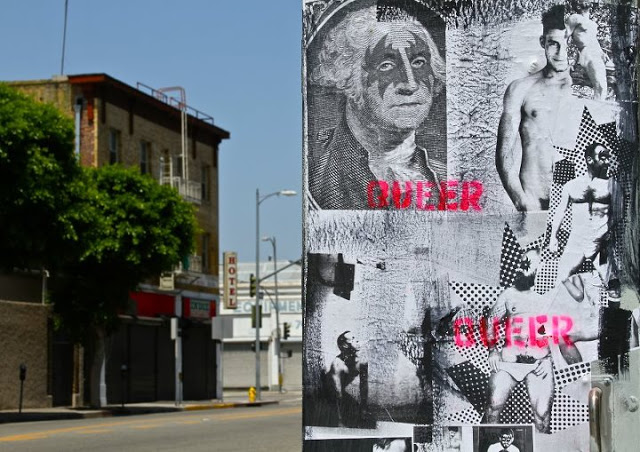 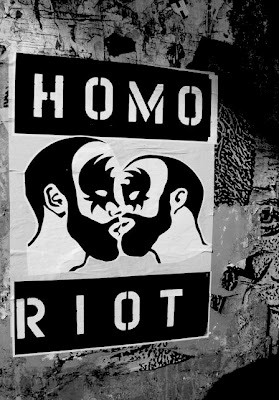 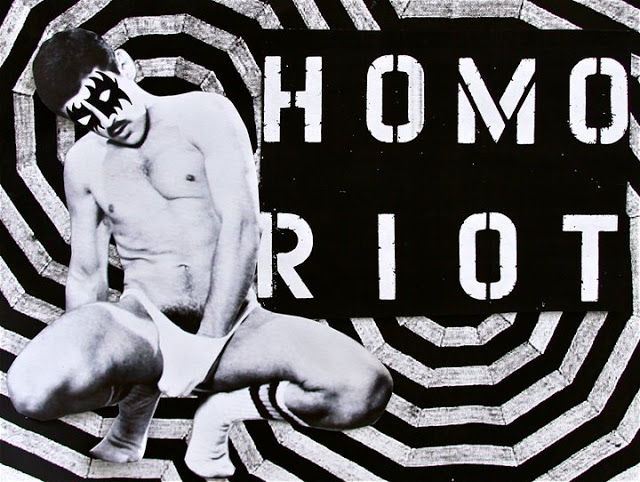 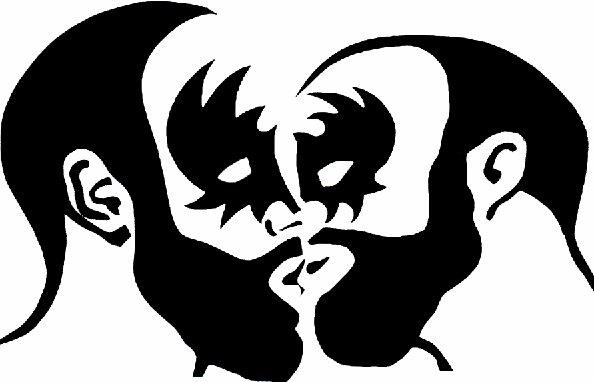 Bears with big dicks, bald and muscle-bound go-go boys or explicit blowjobs. A lot of your works focus on unconventional gay sexually imagery, how would you describe them and what do you want your viewers (gay and heterosexual) to take away from your work? Is there something autobiographical in your illustrations?
My imagery is aggressive and sometimes hostile. Homosexuals throughout history have been portrayed and stereotyped as fay and effeminate. That’s contributed to the perception that we are weak and easy prey for homophobes and thugs. Similarly, those portrayals have informed our own self awareness and identity as a group. I want to fill the world with images of strong and powerful queers; I want to rewrite the story. Don’t fuck with us because we will kick your ass.
I’m also opposed to all forms of censorship. I like dicks and I want to see them everywhere.

What is your haters’ reaction are you most proud and the one from your fans that have mostly surprised you?
Honestly, I don’t have that many haters. I did have the Westboro Baptist Church threaten to protest in front of one of my gallery shows but they never showed up. I hear a lot from my fans and I love communicating with them.

You use street art as a platform but are there other forms of art do you explore? Is this your main activity?
I’m not just a street artist. I have gallery shows, I’m a performance artist, I do murals, I’m a photographer, collage, sculpture, I’m an artist and all mediums are open to me.

Street art world is predominantly heterosexual. Do you know other artist in the worlds that features gay themes in their works?
Yes there are several out street artists and I’m happy and proud to be a part of that subculture.
Paul Le Chien is in London and one of the original Queer street artists, there is Jilly Ballistic in New York, Jeremy Novy in San Francisco, John Criscitello in Seattle, Little Ricky in LA, and many more, but not enough.

Posters, stickers, stencils. How do you come up with ideas for your interventions and what projects are you working on?
I just follow my intuition and use materials that are available. My aesthetic is gritty and aged and I try to imbue each piece with that vibe. I like the work to look like it’s been soaked in piss and left outside.

What are you looking forward to next year and what are your plans for the future?
I’m looking forward to producing a lot more work this year. I have a couple of big mural projects and some collaborations with other artists. A Los Angeles based fashion designer has licensed some of my work and is coming out with a line of club wear that’s in production currently.