Today we want introduce you a new Thepinksnout’s friend: Tina Lugo. Tina is a talented contemporary US artist whose artworks are inspired by Japanese anime world. Much of his work deals with homoeroticism and his characters are often as trapped in awful nightmares.

If i had to define what I do , it would be labeled as something like this: “ Contemporary Pop Japanese Erotica and Horror.” I was always attracted to these things even as a child. I suffered from intense nightmares growing up, and that mixed with the 90’s at a time where anime was becoming the forefront of cartoons on television, I started finding my niche. I was fascinated by this world Japanese animation was depicting. All the kids were. It was a wild fantasy, an escape from my very normal life. I was super naive when it came to things like sex, so when that was something that stared to be explored by my peers and the cartoons we would watch in High School, I was somewhat of a late bloomer. It’s something I really took my time in exploring and perhaps was considered odd for asking people: “why do you like this?”. Little did I know this would make me study fetish and other types of sexuality later down the line that would help influence my work . I’m still a big kid at heart, and tackle things with childlike enthusiasm.

What is your background? How long have you been a working artist and who were the first artists that inspired you?

I am a born and raised New Yorker hailing from the Bronx. I went to art school all my life, from LaGuardia High school of music and art, to college at School Of Visual Arts. After I graduated college I took the time to just make work that inspired me. I had fallen in love with artists like Yuko Shimizhu, Nicolas Touron, and manga artists like Katsuhiro Otomo-the creator of Akira. After many entrance fees to group shows and submission based Galleries, I started getting them more easily and eventually had my first solo show in Greenpoint Gallery in Brooklyn New York. Before long, a few images I had made had gone viral and soon a small positive collective of bloggers had been talking about my work. I would say I have been a successful working artist for about 5 years now.

When did you first know that you wanted to be an artist? What attracted you to it? is this your main activity?

I had drawn since I was 4 years old but the actual thought of being an artist didn’t occur to me until I was about 12 years old. Cartoon Network was airing “Toonami”, a schedule block of all anime. Sailor moon, Zoids, Dragonball Z. I was hooked and realized : “I wanna do that!” At first my sights were set on becoming a manga artist. I wanted to make graphic novels that would later become cartoons. But as I grew older I realized I had potential in painting, and bridging a gap between a fine art world and an underground comic art realm. Now I’m lucky enough to travel and show in galleries internationally.

How do you come up with ideas for your projects?

It varies. It can be as simple as a dream, or a conversation I had with friends, or even a bizarre scene in a movie I’ve just watch that can spark an idea.

You use bring an added sense of humor, surrealism and sexuality. What made you focus on it?

I had my first relationship when I was 18 years old. (Like I said, late bloomer). She was everything I thought one could expect from their first exciting lesbian relationship. But we were young and she was abusive. Whether she understood what it was she was doing or not, I went through emotional and physical abuse with her for 3 years. I had never enjoyed sex with her, and my perception of it was skewed. I didn’t know how to allow myself to be loved or what it meant to be touched in a healthy way. There was anger and resentment growing inside of me and I had no one to talk to about it, as outsiders believed we were the “Perfect couple”. So I painted to relieve the stress and find a way to let my anger out. Much of my work deals with homoeroticism but also characters who are either in a peculiar fetish realm, or trapped in a nightmare in their beds reliving a trauma. It all stems from my experiences and how over time how i’ve combated it, and come up with healthier relationships and a better attitude towards sex as a whole. Its now something I enjoy and love to explore and talk about with people. It made me realize how much is still so taboo, and how I want to help break those boundaries and create work people will talk about. 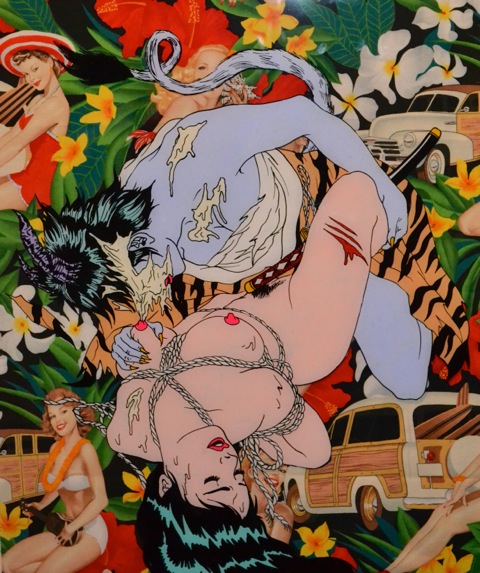 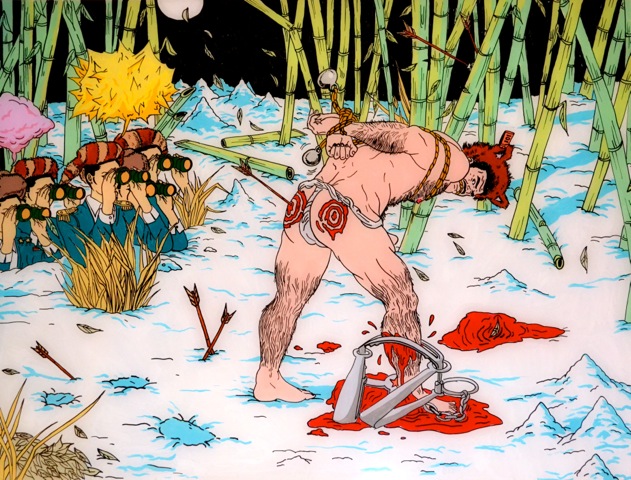 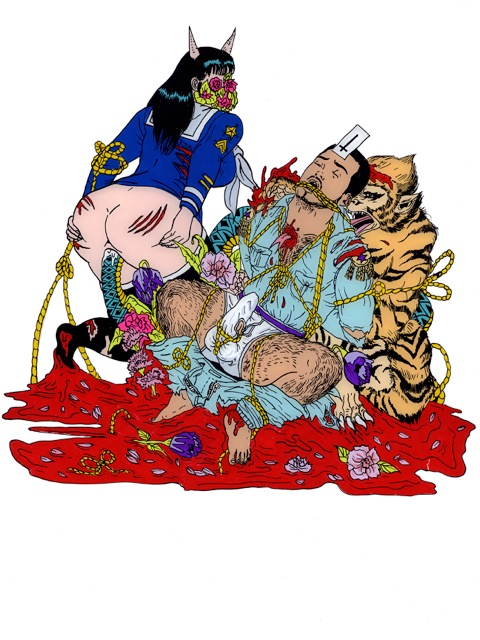 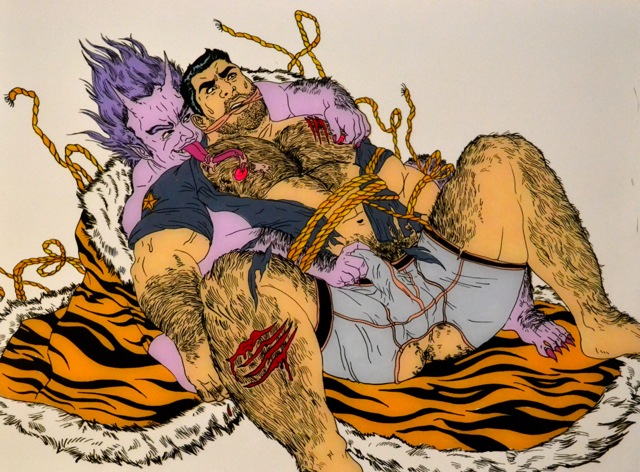 Your artworks have a haunting impact on viewers and your work could make people uncomfortable – is this your aim?

I aim to make people talk. Some people look at a painting, make a slight remark about its beauty, but then pass on to another beautiful oil painting after another without perhaps going into much thought on the subject. I want my pieces to be something you can’t pass by without gawking at, having a reaction to, and feel that need to tug on your friends shoulder and make them see what it is you’re looking at. Sex is uncomfortable. Its always the elephant in the room that people have on their minds but don’t feel the need to acknowledge. I want people to see what I do and have a conversation. Why is this piece turning you on? Why does it frighten you? Are you repulsed because you secretly like it? Or is it because you can’t relate and it makes you feel weird? I want these things to be discussed. Thats what art should be about, making you question yourself and your ideas.

Tell us about the homoerotic imagery in your artworks. Do you purposefully present queer content in your works or Is it more something that comes naturally to you as an artist.

I have paintings that have queer tendencies. Even if there is a seemingly straight couple in it, you can never be too sure. I want it to be more fluid as sexuality is fluid. I personally find homoeroticism underrepresented. Porn has many fake lesbians, or gay men with six packs and perfectly waxed. What about bears? What about transgender? What about thicker women, with hairy pits and a face that isn’t brought to you by Cover Girl? To me its the everyday , normal people that are really sexy to me. Perhaps because mainstream is so overblown, I can’t find that Sports Illustrated woman a girl I want to fuck. Its just not real. I want realness. And I want realer queer representations. Although I have the intent to produce homoeroticism, it also comes naturally to me as a queer artist.

Why hairy gay bears are your all time favorite?

I was always afraid of going to gay bars. I didn’t feel like I fit in until a friend took me to a Bear bar. They were so amazingly sweet and proud to show off their hairy chests and robust figures, their flaring happy trails and leather harnesses. It reinvented what I thought about the ideal image of gay was. There is none. And there is something amazing about their openness, and their masculinity and how I correlated it with Japanese Oni. Oni are hulking beasts in Japanese mythology that have a reputation for being “the strongest of the strong” and being fearsome and unchallenged. I wanted to further explore this idea of a burly man, suddenly becoming helpless and put in queer situations. Messing with our notions of what that image of a muscular man being vulnerable means. Its sexy to me, and also I enjoy making people uncomfortable about men being vulnerable. Its another thing society thinks doesn’t exist.

How do you resonate with the term queer?

Queer for me is a friendlier label than “gay” , “lesbian”, or any other. It sounds less ridged and more prone to fluidity. I know I’m 100% sure that I love women, but that doesn’t mean I don’t get turned on by straight sex or the idea of a swollen phallus. And in no way do I want that to mean I’m any less of a “lesbian”. I’m a gold star after all! But queer has always had a special place for me since I fell in love with Garbage and they churned out the song “Queer” . It was a word that inspired a warm accepting feeling.

Is there something autobiographical in your illustrations?

Absolutely. The bulk of what I do has come from personal experience or people I’ve met and what they tell me about their lives and experiences.

What next projects are you working on? Are you planning future videos or animations?

Right now I’m producing work for a few galleries including a solo show at Stone Malone Gallery in LA. I would love to do an animation, but we will see how that goes! I have to meet the right people first who would want to work with me on something.